Port Royale 4 has taught me something. It’s taught me that things are always better when people listen to me. Now, I’m not saying that developers Gaming Minds Studios directly acted upon my preview, particularly my complaints about the tutorials being too slow and in desperate need of a skip button for the long monologues, but the tutorials now have a skip button. Success.

Well, partial success. There are still long-winded parts that drone on even after you’ve done the task. It’s a step in the right direction still. But now that I’ve made the gaming world a much better place with the speeding up of a tutorial, let’s have a look at the rest of the game. Is it good, bad, or mediocre? Is it the strategy/simulation answer to all of your wildest fantasies? Let’s take to the Caribbean and find out. 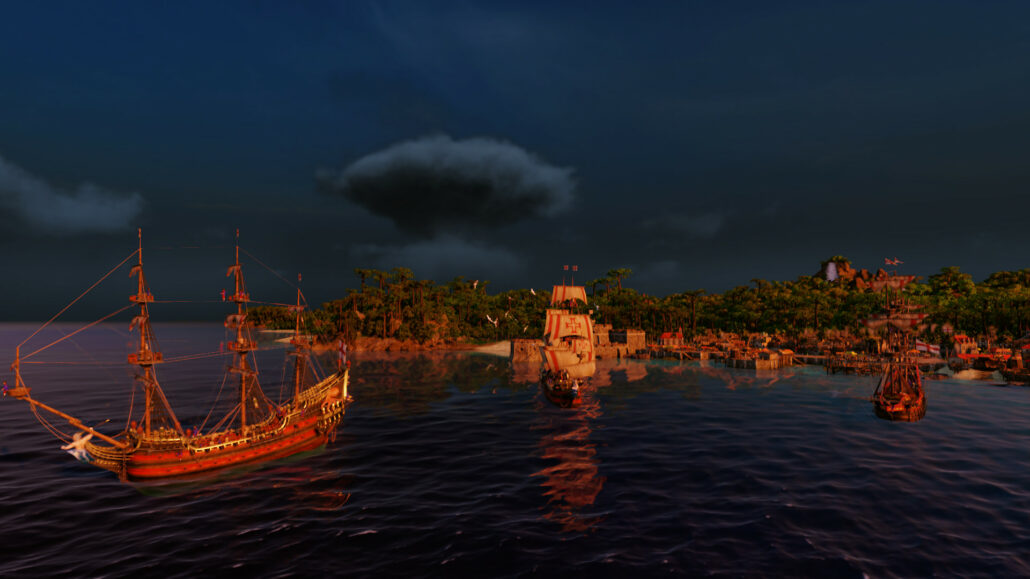 Much like I said in my preview of Port Royale 4, the game really doesn’t need such a long-winded tutorial. If anything, it gives the worst impression possible of the game due to how drawn out it is. It will be giving you a long line about landlubbers, wenches, rum and any other pirate cliche, rather than just saying “OPEN YOUR MENU, DOLT”. It’s not like you have a choice, all other options are blocked. I’ve even had the tutorials break on me, requiring a restart, where it wouldn’t recognise me having done what it asked.

What’s strange about this whole pirate nonsense is that Port Royale has never really been a series about piracy and Port Royale 4 doesn’t suddenly make that turn. You can, of course, be a pirate if you want to be, but that isn’t the core part of the game. No, if you were to say what exactly you’ll be doing in relation to pirates in this game, it’d be killing them. The campaigns place you as a part of one of the colonising countries during this time: England (the UK didn’t exist back then), Spain, France and The Netherlands.

Your task as part of one of these colonial countries? Well, to colonise of course. Starting off at the bottom of the rung, you have the ability to trade with and build within your starting settlement, some early ships to load up with goods, or fight with, and the starting capital to start trading with. Each settlement will cost you a certain amount of money to purchase a trading license, each one only having a limited number of base resources that can be produced, that’s where the trading comes in.

Buy low, sell high. Simple and clean. Beyond the basic aspects of free trade, some settlements can also send out specific orders that you can accept and fulfil. As well as netting the profit and increasing your reputation with that colony, you’ll also be rewarded with points towards your rank with the country that owns the colony. The higher your fame, the more concessions you get, the more captains, structures and perks you can unlock.

Skater XL Review – A Skateboarding Game, Without the Game 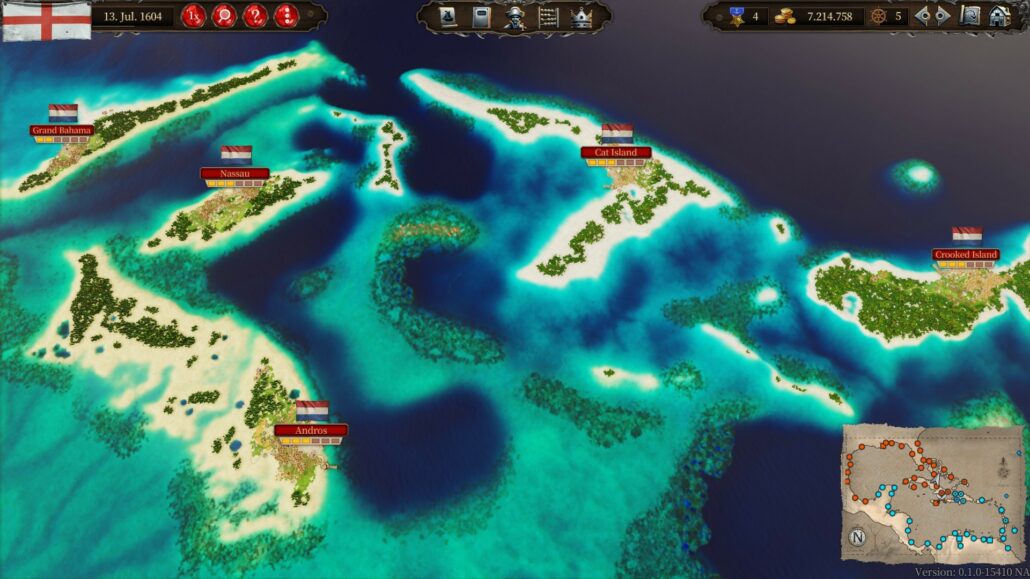 Now, doing all of this and sailing across the Caribbean all by yourself would take an absolute age, especially when you start developing and building up the colonies that you’ve been placed in charge of. That’s where the management aspect of the game comes into full force. If you’ve got the money, there’s no real limitation to the number of fleets and trade routes you can set up. Set these up well, fulfilling the needs of multiple colonies and that’s essentially the money aspect of the whole game sorted.

Well, I say sorted, it’s more half-sorted. What you’ll really want to do is start fiddling with the direct development of these colonies. Earn and buy the right to start building in these colonies, first with production buildings and finally to everything from the houses to the hospitals, gardens, and churches, and you’ll be able to truly maximise the profits you can earn. Port Royale has always been a game that appeals to a certain type of person, I am one of those people too. I love management sims so all of this is very satisfying.

If there is one thing that is particularly satisfying for all the boring people whole like this sort of game, then it’s the level of detail that’s gone into the trade route and general sailing systems. In my review, I mentioned the detail that has gone into this, and I do really appreciate it. Looking at the weather and terrain system, seeing dangerously high winds and shoals, the game naturally gives you the ability to set waypoints for your trade routes to make the route as fast as possible, while making the risk assessment of if the speed is worth the risk.

Another thing I appreciate now is a few tweaks to the city-building mechanic. Earlier on I proclaimed that my highlighting of issues in the tutorial, which has partly been fixed, has made the world a better place. Another issue I highlighted was the fact that you couldn’t highlight boost-generating buildings. You still can’t completely, but when you’re looking to build a new hospital, tavern, park, whichever, the ones you’ve already built have a slight glowing pillar to indicate where they are. I’m not saying that I’m a gaming guru, thanks to these changes, that’s for you to say. 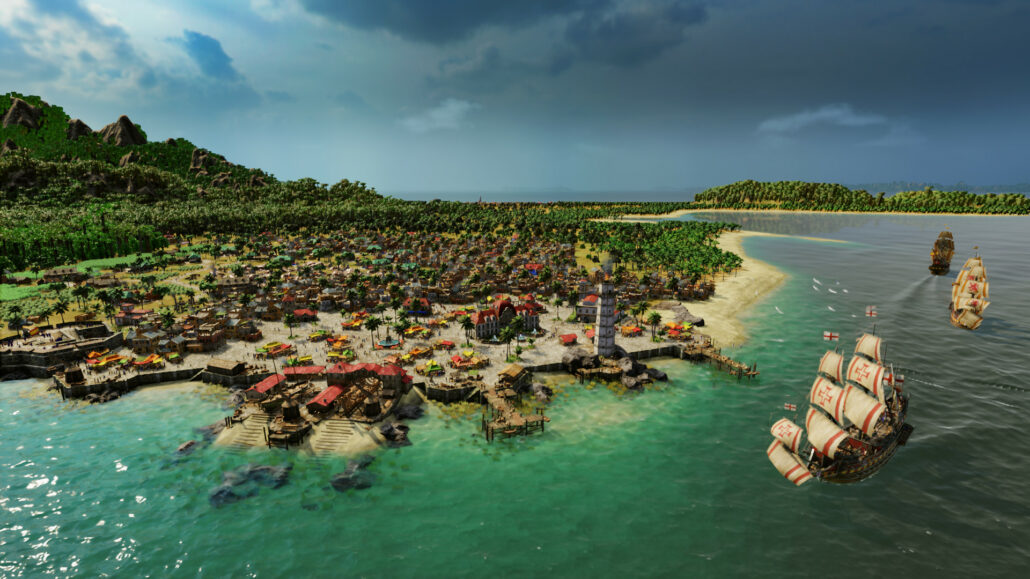 In all seriousness, I do still have a few issues with Port Royale 4. One large issue comes from the campaigns. The objectives you have to complete are understandable in a route of natural progression. However, the time limits are a little too strict for my liking. I understand that you’re working for a country, you’re given orders, but Port Royale 4 shows you the whole Caribbean and then immediately starts limiting you by tasks that are way too rigid.

I should clarify that each campaign does offer a different focus. The first, Spain, is all about trade. England, The Netherlands and France offer campaigns that are focused in different directions, respectively looking at war, trade and production, and city development with a dash of treasure hunting. The variety is all there, though I still think it would have been improved by more flexibility. You can, of course, get whatever flexibility you want by simply jumping into the free mode and do whatever you like. This I’d recommend.

The other issue I have comes with a few bugs here and there. I’ve had enemy AI refusing to take their turn in battle – they must have been so scared that they thought they’d wait me out, they won – and I’ve had one or two crashes. Nothing that’s cost me more than a quick restart, but it’s still a pain.

While we’re on the topic of combat, shoehorning it in because I don’t have any more to say than I said in my preview, I still like this. Yes, it’s not as fluid as open-seas combat but the turn-based hex-grid combat system is still quite tactical. It removes any risk of enemies permanently circling and other niggles that featured prominently in Port Royale 3. So yes, I quite like the combat system. 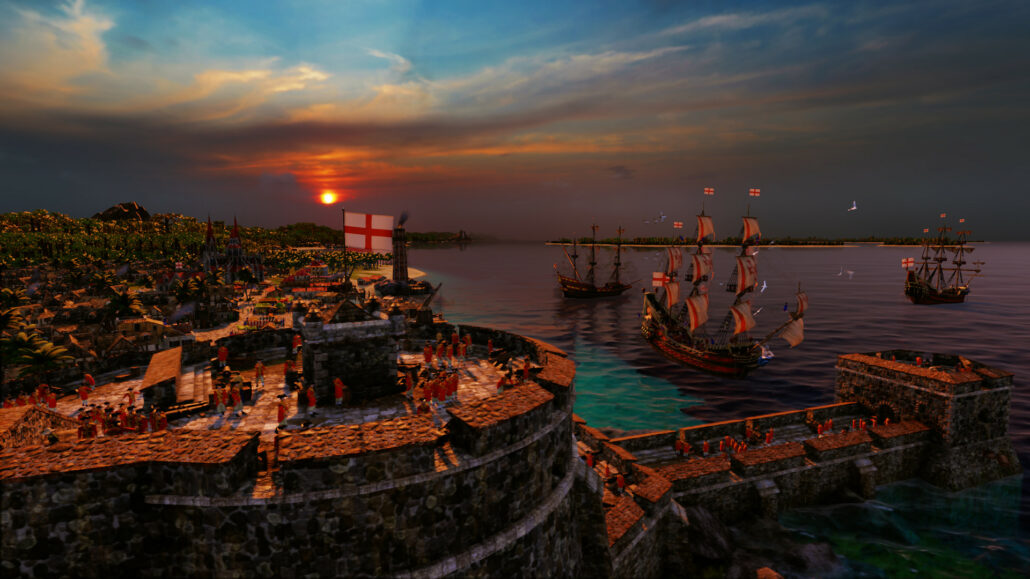 So, if I like the trading mechanics, the weather and terrain systems, the combat and a few other aspects, do I like Port Royale 4? We’ll give this a resounding “Yeah, it’s decent”. Aesthetically, the series is the best it’s ever been. I also can’t help but emphasise that the turn-based combat offers strong tactical depth. The city and production development of the game, which ties in great with the trading, is also strong and user friendly.

However, the thing is that once you’ve got the trading automated, other aspects just don’t feel fleshed out enough. The side quests are too repetitive. A fetch quest in a ship is still a fetch quest, that’s as simple as that. There just isn’t enough variety. You can, to an extent, make your own story by flying the jolly roger and taking the fight to all four countries once you’ve built up enough of a force. It’s still not enough to elevate the game past “Yeah, it’s decent”.

Port Royale 4 is a solid trading and building management sim. The improved visuals, as well as some improved mechanics, help set this apart, as does the tactical turn-based ship combat. It’s very user-friendly and intuitive, particularly with the city building and trade-route creating aspects. However, it isn’t without flaws. Side quests feel very repetitive and don’t really give you enough to do and the campaign can be too rigid, not giving you the amount of time you’d need to do anything other than the bare minimum for the tasks set. If you like this sort of game, Port Royale 4 is likely just up your alley, but I can’t see it converting anybody to the cause.